Even before he arrived in Green Bay, Paul Hornung was known as 'The Golden Boy.' And golden he was for the Packers over his nine-year career.

One of the most versatile players in team history, Hornung was an NFL MVP award-winner (1962) and member to three NFL championship teams (1961, '62 and '65). More than 35 years after his retirement, he remains the NFL single-season record holder for points scored (176).

The Packers acquired Hornung by selecting him with the first overall pick -- their 'bonus choice' -- of the 1957 NFL Draft. Hornung was coming off a senior season at Notre Dame that was so impressive that the national media looked past the 2-8 record of the Irish in awarding him with the Heisman Trophy.

Primarily a quarterback in college, the 6-foot-2, 215-pound Hornung made his reputation in the NFL as halfback under head coach Vince Lombardi. But as talented as he was carrying the football, Hornung remained dangerous with his arm and was an outstanding lead blocker, receiver and kicker.

One of only four players in Packers history to score more than 600 points, Hornung finished his career with 760 points on 62 touchdowns, 66 field goals and 190 extra points.

Hornung was the Packers' leading rusher his first two seasons in the league until Jim Taylor began compiling 1,000-yard campaigns in 1960. But if Hornung was forced to share the spotlight with his backfield mate, his value to the team was unmatched.

Hornung also passed for two touchdowns that season, meaning he had a hand in 188 points for the year -- an average of 15.6 per game. 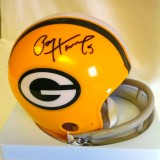