Former Green Bay Packers Quarterback Brett Favre is the only quarterback in NFL history to throw for over 70,000 yards, over 500 touchdowns, and over 10,000 pass attempts. He officially retired on January 17, 2011 and returned to Green Bay, WI in 2015 for his induction into the Green Bay Packers Hall of Fame!

It was a tremendous honor to play 16 years for the Green Bay Packers. Now to have my name placed among others such as Starr, Hornung, Kramer, Taylor, Lambeau, Nitschke, Lombardi, Davis, White and Hutson is a special honor that I share with all of my teammates and coaches, and that would not have been possible but for the foresight of Ron Wolf, the greatest GM in the history of the NFL.

Own your piece of Authentic Brett Favre Memorabilia today! 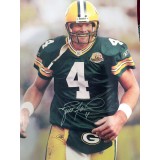 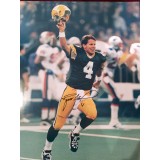 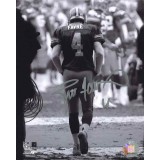 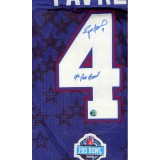 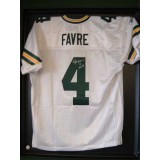 Authentic Style Packers Away Jersey Autographed by Brett Favre (#4)
Complete your Favre-shrine with this authentic Reebok jersey signed by #4. This item comes with..
$349.00
Add to Wish List
Add to Compare 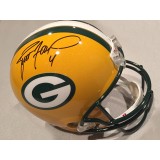 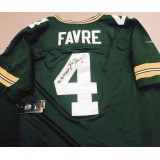 Packers Home MVP Jersey Autographed by Brett Favre (#4)
Complete your Favre-shrine with this authentic Nike jersey signed by #4. These are currently EXTR..
$549.00
Add to Wish List
Add to Compare 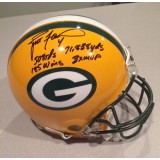